Wake up call, do you have the right chain for securities? 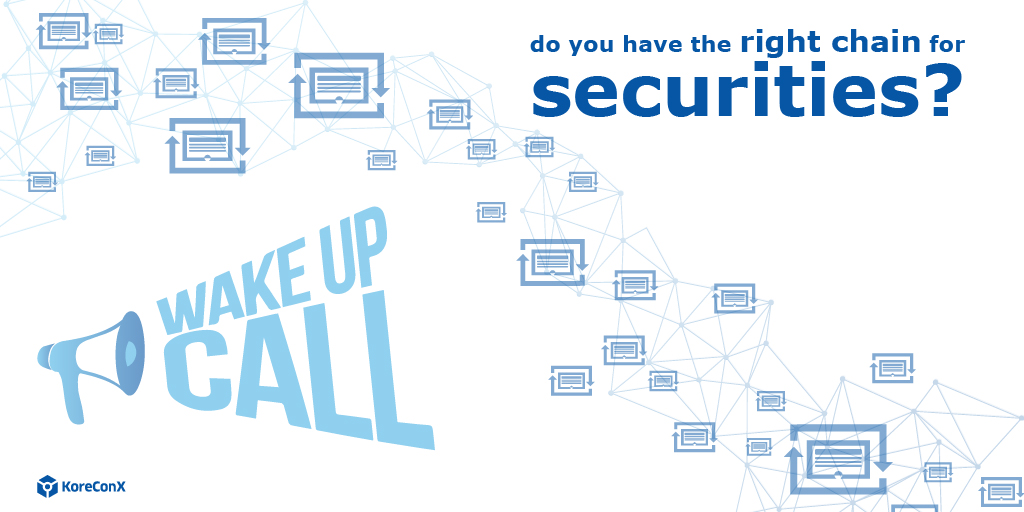 Polymath is the latest of the Ethereum fan club that has woken up to the fact that Ethereum isn’t the right blockchain platform for financial securities. The reasons include the permissionless and unverified participants, gas fees, unpredictable settlement, poor performance, and lack of scalability.

Vitalik himself was the first to point this out way back on May 9, 2016 (3.5 years ago—a lifetime in crypto-space) in a blog post on Settlement Finality: “This concept of finality is particularly important in the financial industry, where institutions need to maximally quickly have certainty over whether or not the certain assets are, in a legal sense, “theirs”, and if their assets are deemed to be theirs, then it should not be possible for a random blockchain glitch to suddenly decide that the operation that made those assets theirs is now reverted and so their ownership claim over those assets is lost.”

Independently, we (KoreConX) too came to the same conclusion when we first started looking for a good platform for our digital securities and our all-in-one applications that serve the market. This does not detract from the engineering prowess of the Ethereum team, who have taken on a monumental task in trying to create an open blockchain platform that is everything to everyone.

The real problem in the financial markets is that of investor safety. No amount of cryptography can guarantee the validity of participants and of transactions precisely because verification and validity is not in the technical domain. Rather, it’s in the social, economic, and regulatory domain. Blockchain will immutably commit all data regardless of its business validity, as long as it’s cryptographically valid. It is up to the blockchain applications and smart contracts to ensure business validity. This too is not a technical issue but a legal issue. Securities contracts should be authored by securities attorneys, not programmers. Indeed, smart contracts as conceived in Bitcoin and Ethereum are neither smart nor contracts. The word ‘contract’ is an obfuscation of ‘interface specification’ that is commonly referred to as a ‘contract’ between two applications in the software world. Unfortunately,

To their credit, the thought-leaders of Ethereum were under no illusions about the supposed prowess of smart contracts, as defined within Ethereum. Vitalik Buterin, for example, tweeted back on October 13, 2018, “To be clear, at this point I quite regret adopting the term ‘smart contracts’. I should have called them something more boring and technical, perhaps something like ‘persistent scripts’.” Another Ethereum, Vlad Zamfir, preferred the term ‘stored procedures’.

The most important thing that the open blockchain community missed is that except for currency, financial securities are not bearer instruments. Creating fraudulent securities through shell companies is ridiculously easy with bearer instruments, which is why they are banned in responsible economies.

Besides the fact that securities are not bearer instruments, the public blockchain advocates seem to be coming to the realization that when securities are exchanged between two parties, independent and unverified miners have no business validating the transaction. Parties who have no fiduciary responsibilities, no regulatory mandate, or any skin in the game cannot perform business validation. Would you ask a stranger in New Zealand to approve the transfer of your shares in a private company to your friend when you, your friend, and the private company are all in the USA? As Polymath’s Dossa observers, “How ethereum settles transactions through mining also came into consideration for Polymath, Dossa said. Since miners, who process and sign-off on transactions for a fee, can operate anywhere in the world, institutions could face government scrutiny if fees are traced back to a sanctioned country.” More to the point, securities law does not recognize approvals from parties who are not associated with securities transactions.

Even as the public blockchain community tried to disintermediate regulators, when their assets were stolen from their wallets and exchanges, or the companies vanished outright, investors turned to those same regulators for recourse and recovery.

The other problematic aspect of Ethereum was the nature of finality, which in Ethereum, is statistical. This will not do in legal agreements. As we pointed out early last year in one of our KoreBriefings when evaluating Ethereum, “Finality [in Ethereum] if probabilistic and not guaranteed.” Would you sign an employment agreement where the fine print says there’s a one-in-ten chance that you would not be paid every two weeks. As Adam Dossa, Polymath’s head of blockchain, rightly observed, “At the center of contention is ethereum’s consensus mechanism, proof-of-work (PoW), which only offers a statistical guarantee of transaction finality.”

Incentives often have unintended consequences. We see this happen often with children and pets. Public blockchains are all about decentralization, but in fact miners’ incentives have all but centralized the blockchains. In contrast, consider that within KoreChain we have not left the question of decentralization to the vagaries of unknown miners. Instead, the KoreChain is engineered for decentralization. It is an implementation of the Infrastructure of Trust that currently runs in production in twenty-three countries; in barebones minimal cruising mode, it is capable of handling approximately 10 billion transactions per year (~318 tps) with consensus on business validity. KoreChain’s architecture also makes it massively scalable with very little effect on performance. However, as Vitalik rightly points out, finality can never be 100% even if the technology can achieve absolute finality, since the ultimate arbiter of finality is the legal system. For this reason, KoreChain includes KoreNodes independently are owned and operated independently by regulated entities and regulators worldwide..