The State of the Jobs Act 2021 KoreSummit Webinar 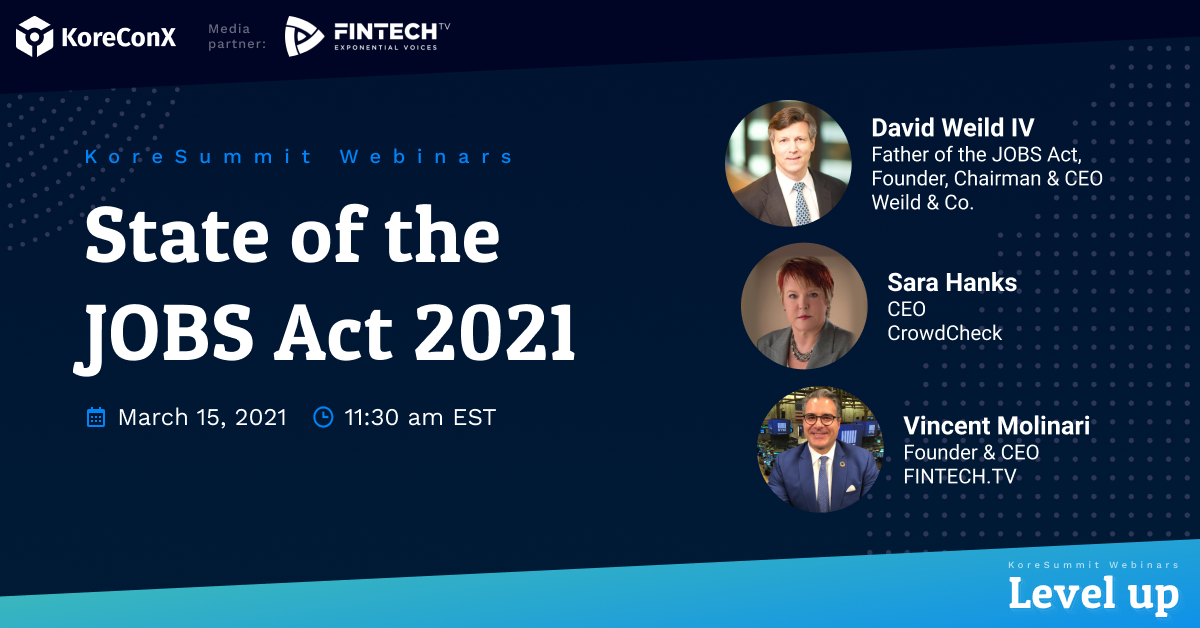 The JOBS Act was signed into law just nine years ago, in April of 2012. Since then, thousands of companies have taken advantage of the Act’s exemptions to raise capital for their companies.  More than half a million investors have participated, providing funding to these companies—and it’s just getting started!

The JOBS Act’s fundamentals are simple:

The proof of momentum is in the numbers and there now exists real tangible growth in the private markets.

The JOBS Act’s Impact by the Numbers for 2020

On November 2, 2020, SEC Commissioner Jay Clayton announced an amendment to two regulations that have truly expanded investors’ access to the funding of startups, emerging growth companies, and affinity-based projects online.  Companies can now use Reg CF to raise up to $5M USD, and RegA+ to raise up to $75M USD.

On March 15, 2021, our webinar brings together two individuals who began this journey more than a decade ago. You will hear them reflect on their experiences and, more importantly, what lies ahead for the next version of the JOBS Act and the following chapter on capital raising for entrepreneurs.

David Weild IV is a stock market expert best known for his position as Vice Chairman of NASDAQ. He is currently the Founder, Chairman, and CEO of Weild & Co. Inc., the parent company of the investment banking firm Weild Capital, LLC (dba Weild & Co.). Weild is also known as the “father” of the JOBS Act and has been involved in drafting legislation for the US Congress.

Sara Hanks, CEO of CrowdCheck and Managing Partner of CrowdCheck Law, is an attorney with over 30 years of experience in the corporate and securities field. CrowdCheck and CrowdCheck Law together provide a wide range of legal, compliance, and due diligence services for companies and intermediaries engaged in online capital formation, with a focus on offerings made under Regulations A, CF, D, and S, whether traditional or digitized securities.

Sara’s prior position was General Counsel of the bipartisan Congressional Oversight Panel, the overseer of the Troubled Asset Relief Program (TARP). Prior to that, Sara spent many years as a partner at Clifford Chance, one of the world’s largest law firms. While at Clifford Chance, she advised on capital markets transactions and corporate matters for companies throughout the world. Sara began her career with the London law firm Norton Rose. She later joined the Securities and Exchange Commission and as Chief of the Office of International Corporate Finance, she led the team drafting regulations that put into place a new generation of rules governing the capital-raising process.

Sara received her law degree from Oxford University and is a member of the New York and DC bars and a Solicitor of the Supreme Court of England and Wales. She serves on the SEC’s Small Business Capital Formation Advisory Committee. She holds a Series 65 securities license as a registered investment advisor. Sara is an aunt, Army wife, skier, cyclist, gardener, and animal lover.

This fireside discussion will be hosted by Vincent Molinari, co-founder and CEO of Molinari Media (Fintech.TV), who has followed the industry and is using the JOBS Act to raise capital for his own firm.