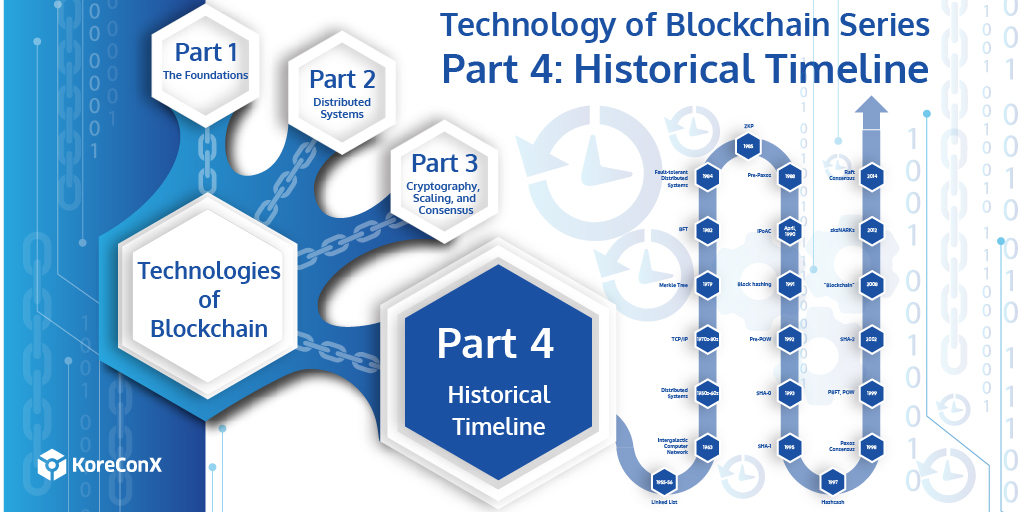 In parts 1, 2 and 3, we briefly touched on some of the historical foundations of blockchains from computer science and mathematics, including their sub-topics such as distributed systems and cryptography. Specific topics in either of these categories were consensus mechanisms, fault-tolerance, scaling, zero-knowledge proofs, etc.

Obviously, this brief series doesn’t do justice. The history of computing and mathematics is rich, with many interconnections and dependencies. The goal of this series was to provide just enough to make the point that the technologies that power blockchain (whether public or private) were built on a well-established foundation of various topics with contributions from real scientists in both industry and academia. The graphic below depicts the broad brush-strokes of development, clearly showing how current blockchain technologies are based on a wide spectrum of historical developments.

Conclusion
As you can see, a tremendous amount of development that took place for almost half a century made the modern blockchain possible. Bringing these technologies together—almost all of them based not on just techniques but deep mathematical foundations—into a cohesive whole in the form of a bitcoin application was no doubt a tremendous achievement in itself

Moving forward, we need to keep in mind the initial motivation for each of these technologies, their strengths, their limitations, and determine how to create different architectures based on business needs. A good example of this is to relax the requirements of anonymity, strengthen safety, incorporate recourse, improve security, and incorporate the enormous complexity of regulatory compliance in securities transactions. Making such trade-offs doesn’t detract from the need for public, decentralized blockchains. On the contrary, this strengthens the use of the blockchain technology ‘horizontally’ across many industries and use cases.

In the near future, we expect to see some innovation in blockchains to improve performance and scalability, which is a special challenge for public blockchains. Along the same lines, there will be new consensus mechanisms going mainstream (such as proof-of-stake). For consensus and validation, blockchain researchers are investigating efficient implementation of zero-knowledge proofs and specific variants such as zkSNARKs.