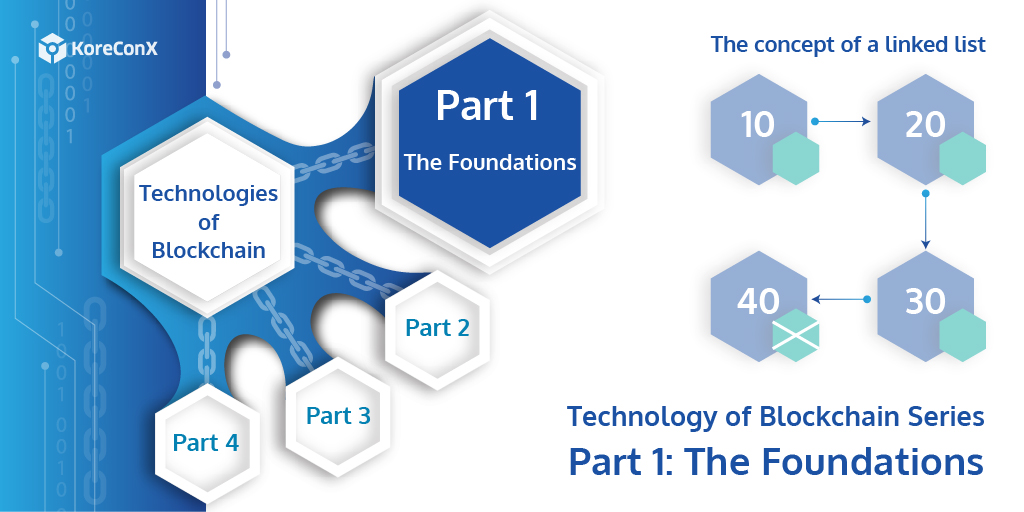 Blockchain is not just a single technology but a package of a number of technologies and techniques. The rich lexicon in the blockchain includes terms such as Merkle trees, sharding, state machine replication, fault tolerance, cryptographic hashing, zero-knowledge proofs, zkSNARKS, and other exotic terms.

In this four-part series, we will provide a very high-level overview of each of the main components of technology. In reality, the number of technologies, variations, configurations, and considerations of trade-offs are numerous. Each piece in this puzzle was motivated by certain business requirements and technical considerations.

In this first part, we look at the origins of the ‘chain’ and the most important technological advancement that makes blockchain (and all e-commerce) possible, i.e., the Internet.

While there have been genuine innovations within the last decade, blockchain’s underlying technologies are mostly quite old (in computer science time scale). Let us unpack a typical blockchain to trace out the origins of the constituent technologies. In this short post, I’ll only point to a very small (some may say, infinitesimally small) subset of the historical origin of technologies that make the modern blockchain possible. I’ll make no attempt to trace the development of these concepts from origin to the present time (that would fill up several books). The fact that blockchain’s technologies have a long and respectable history should help us gain confidence that blockchain, as a technology, is not some fly-by-night, newfangled idea cooked up by the crypto fandom.

What is less certain and much more controversial is the economic justification for blockchain (or at least some types of blockchain), ranging from the unrealistic expectation that it is a panacea for all of humankind’s ills (most optimistically, for social and economic inequities), to the total and premature dismissal of blockchain in its entirety.

At the conceptual heart of blockchain is the ‘chain’. By definition, the links of the chain are, well, linked. It’s a list of data elements or packets of information (in blockchain, these are called ‘blocks’) that are linked. A blockchain is, therefore, a type of linked list.

The concept of a linked list was defined by pioneers of computer science and artificial intelligence, Alan Newell, Cliff Shaw, and Herbert Simon, way back in 1955-56.

In the early days of computer science, data and processing power lived on individual computers. Soon, people wanted these computers to ‘talk’ to each other. The grand idea of an Intergalactic Computer Network was put forth by J. C. R. Licklider as early as 1963. Unfortunately, even after half a century of rapid development, we have achieved only a planetary-wide Internet so far. An ‘intergalactic’ network is still a few years away!*

These ideas and the need to connect dispersed computers gave rise to wide-scale distributed systems in the 1960s-70s, with the advent of ARPANET and Ethernet. Technically, these linked computers are not necessarily treated in the same way as a traditional linked list that lived on one computer, but the conceptual idea is similar. When data and computational power get dispersed, layers of management, coordination, and security become increasingly important.

Blockchain would not exist without the Internet, which itself would not exist without TCP/IP, developed by Bob Kahn and Vint Cerf in the 1970s and ‘80s. Along the way, some scientists managed to have some fun too. They carried out an April Fools prank in 1990 by issuing an RFC (1149) for IPoAC protocol (IP over Avian Carriers, i.e., carrier pigeons). The punch line was delivered in April 2001 when a Linux user group implemented CPIP (Carrier Pigeon Internet Protocol) by sending nine data packets over three miles using carrier pigeons. They reported packet loss of 55%. A joke that takes a decade to pull off is practically Saturday night live comedy in Internet time scale!

In part 2, we will see how the extension of the concept of linked list on the Internet leads to distributed systems, the attending challenges, and their solutions.

*We first need to take care of a minor detail: find or colonize alien planets in this and other galaxies.