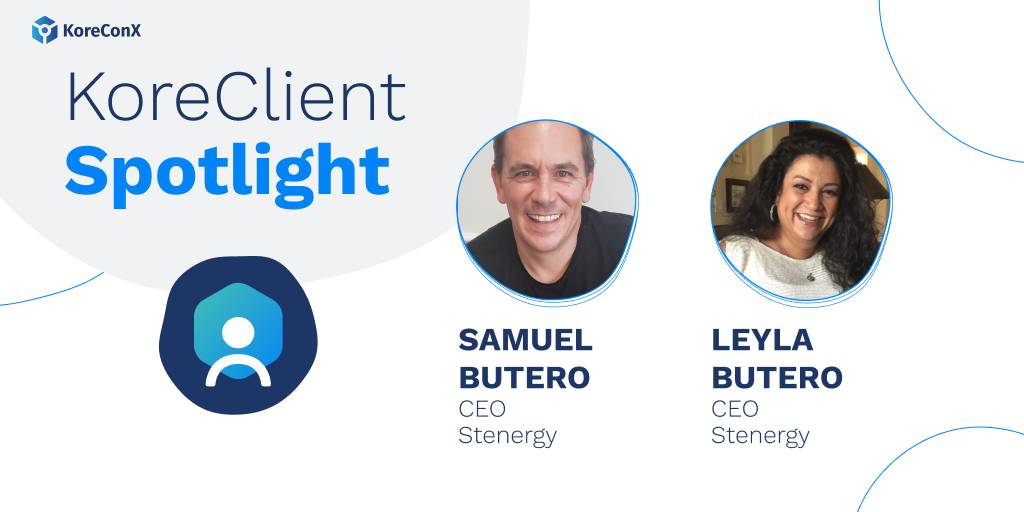 When Samuel and Leyla Butero decided to start their own business, they knew they had to offer a product that would make a difference in people’s lives, and with Stenergy, they hope to do just that. Stenergy is a health and wellness company that manufactures GluCora, a natural supplement that supports healthy glucose metabolism, and has received approval from Health Canada, the Canadian equivalent of the US Food and Drug Administration. In this recent interview, Samuel and Leyla shared their story of entrepreneurship and why they chose to do a Regulation CF campaign for their business.

Working as consultants for EastGate Biotech, a Canadian pharmaceutical company that creates insulin drug delivery technologies for the treatment of Type 2 diabetes, Samuel and Leyla discovered GluCora, a product the pharmaceutical company had decided not to focus on while it developed its core product lines. Leyla, who has long struggled with blood sugar levels, saw the potential of the product and the couple negotiated a licensing agreement with EastGate to be the exclusive manufacturer and distributor of GluCora in the US, Canada, and Central and South America, with first rights to the rest of the world.

The active ingredient of GluCora is the Banaba plant, native to Southeast Asia and known as the crepe myrtle tree in the US. Banaba produces corosolic acid and has demonstrated the ability to improve the metabolism of glucose. The plant has been used for hundreds of years in traditional medicines, but GluCora makes it available in a product that has been approved by the Canadian health regulatory agency and that is available over the counter. Samuel said: “That it’s been shown to be effective and do what it says it’s going to do is really important and we feel that sets us apart from a lot of other natural supplements. We’re not paying a doctor to do an infomercial and say that it works. That’s a very common marketing gimmick, in our opinion, that a lot of supplements use. Health Canada is a third-party, objective health agency from a country that is widely respected for healthcare.”

For both Samuel and Leyla, the journey with GluCora has been deeply personal. When Leyla was pregnant with the couple’s first daughter, doctors would tell her that she had high blood sugar, despite avoiding foods that would cause this. They felt an intense stigma–as soon as a doctor saw Leyla’s weight, the doctor would attribute it to poor eating habits and no exercise, even though that was an inaccurate assumption. “We started to do our due diligence and our research and felt that this was something experienced by a lot of women that were having this same issue. Doctors weren’t hearing them,” said Samuel. “With our second daughter, I gained 90 pounds, I had gestational diabetes, and I could not control the weight. No matter what I did, the weight was just coming on,” added Leyla. Additional issues continued post-partum and she sought the help of her doctor, who, unfortunately, was not listening to the concerns that Leyla expressed. “No one would hear me.”

It was at this point that the couple discovered GluCora. “Leyla started taking GluCora and within two weeks, lost 14 pounds,” said Samuel. She was feeling better and had more energy, and the couple realized that bringing GluCora to market was something they would have to do themselves. “I had been doing side hustles before that was even a word,” Samuel said of their journey to become entrepreneurs. “I had also worked in venture capital and private equity for some time, so I knew what it took to put a business together. The number one thing I always noticed from the successes versus failures was that successful businesses have a revenue-generating product or service that is scalable and works. That’s what we feel we’ve discovered in GluCora. We know there’s demand out there from people who have no place to turn to.”

To further expand the company, Stenergy has opted to raise capital under the Regulation CF exemption. “The biggest attraction to Regulation CF was visibility and building an ecosystem of not only investors but potential consumers, giving a way to legitimately raise money and work with our investors who are not only excited about the company but a product that could change so many people’s lives,” Samuel finished.

By utilizing Reg CF, organizations like Stenergy can bring their product to market quickly and efficiently while interacting with their potential consumers. This provides a unique opportunity for entrepreneurs like Samuel and Leyla Butero to connect with their target market and get the funding they need to bring their products to life.

This communication may be deemed to be a solicitation of interest under Regulation CF under the Securities Act of 1933, in which case the following applies: