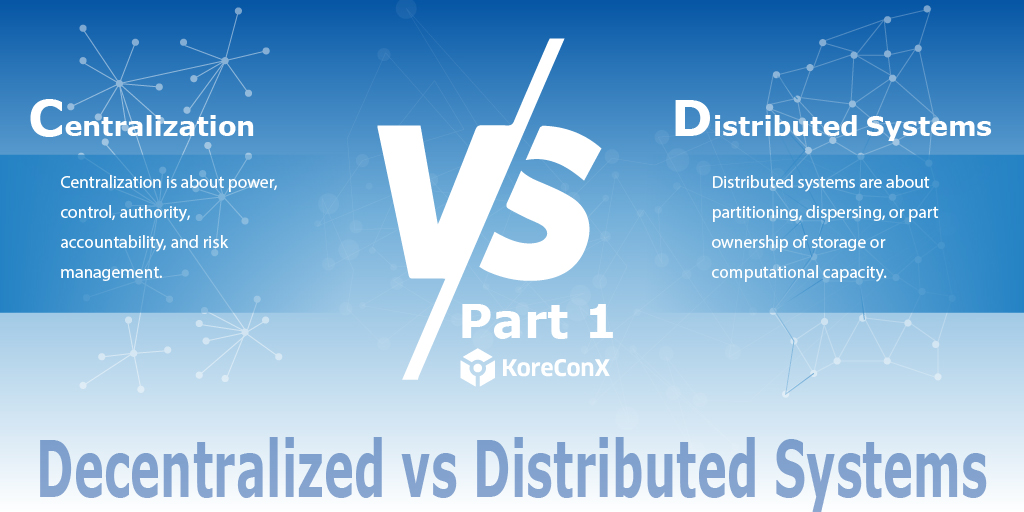 The usual picture used to show the distinction between decentralized versus distributed systems is the one below:

This picture is inadequate since it doesn’t draw a clear distinction between decentralized and distributed systems. The differences in the pictures are rather arbitrary. A slight re-arrangement of the layout of the nodes might convert a decentralized picture to a distributed one or vice-versa.

Centralization is about power, control, authority, accountability, and risk management. Distributed systems are about partitioning, dispersing, or part ownership of storage or computational capacity.

Centralization becomes a problem only if participants have an incentive to take unfair advantage and the system—by whatever name we call it—allows such manipulation. We also have to recognize that not all problems can be solved through technology alone. If that were true, there would be no need for partnerships, service-level agreements, intermediaries, and so on. So, the real challenge is to create an architecture that leverages technology in a cost-effective way while delegating the rest of the problems to the human institutions or social networks.

In a subsequent post, I’ll point to different ways of understanding the nuances between the two, including references from both the public blockchain and academic communities. I’ll also discuss the challenges of designing incentives in decentralized and distributed systems.